My life as an aquarist 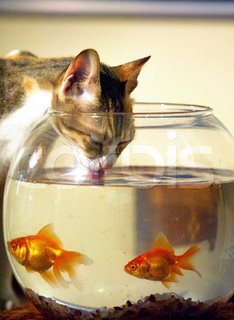 A friend from TSC dubbed me as a goldfish serial killer. For the record so far there were 6 goldfish murdered by me. The first pair, Norlia a.k.a Tora and Ghani a.k.a Taro bought from Pasar Pudu by my fave someone had gone to meet their maker due to overfeeding.

After a few days of mourning I decided to buy a new pair, which had been named as Sushi and Sashimi by their godfathers, David and Nico. Sashimi didn’t last that long, only a few days and I determined not to let Sushi living alone in the aquarium. Mikey had a little journey with me to KLCC and was introduced to several friends from TSC. Together with Sushi, they both were sent over to stay with a friend for a couple of days since I had to go back to my hometown. I thought they would live longer this time since this friend of mine has a better record as the aquarist. Alas, he sent me the sms informing me that both Sushi and Mikey were found dead in the aquarium. I went to Pasar Pudu again with the experienced aquarist and bought myself a pair of goldfish and 5 fish that I don’t know what the species is but I bought them because they were on sale. I proudly named the goldfish as Kimutaku and Yutaka. Yutaka died and went to heaven after 4 days at home.

Due to my bad track records with fish, a few guys had agreed upon that I shall not be trusted with their kids if they happened to have one since I might kill them unintentionally.

Kimutaku has survived the first week together with 5 small fish. I shall keep you guys update on my quest to become a successful aquarist. In the meantime, I suppose i just enjoy the view at Aquaria instead.