I have started to make a full use of my weekly planner. A week before there were only a few notes on my friends birthday but then I realized that I have always forgotten what movies that I have seen or whom that I hang out with on the previous weekend. Thus, last night I have started to write down every detail from what I remember and also the current events. What makes my new habit even sweeter was because the person that I hang out with for dinner yesterday decided to write down his own notes on our outing. Perhaps the beautiful full moon that we saw last night had made us do silly things. Who knows? 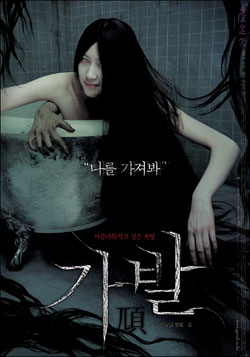 I went to watch this movie after hearing a rave reviews from Nana. To be honest, it was quite scary . I think out of 60 people who were in the cinema hall with me that night, 40 of them would have screamed, while the other 10 would just kept their cool to impress their girlfriends whilst the rest of them would just closed their eyes with jackets and such.LOL.

What makes the movie so different you might say? Well, most of the horror movies made are usually about women who turned into ghosts. But this time, it was a man’s ghost! Yeap, you read it right! MAN’S GHOST!But in this movie it's a gay ghost. Attention: I don't mean to offend any gays out there. I believe that it doesn't matter what your sexual orientation is, but if you are bad then you really are bad. Putting a label on people based on gender,race and sexual orientation is definitely a no-no to me.

What is the moral of the story? I’m not going to say that girls should never use the rebonding technique, which would be silly since hair is definitely a girl’s throne. At the end of the movie you’ll realize that jealousy is the root of evil. When you feel jealous, you’ll tend to have a very negative impression on other persons and it will lead to some fatal incidents. By the way, never leave your camera around or somebody might use it to kill you. I shall remind you guys who either likes to play truant by hanging out in the lavatory or a quickie in the loo should never watch this movie or you might never go anywhere near the toilet bowl.

Praise to God that I have been given another 3 months contract. But still the good news has not put me in the working mode just yet. The week went by as usual in the office. Same shit, different buckets I suppose.

I have developed a decent relationship with some girls who have been working at the office for almost a decade now. One of them has started to feel that her life serves no other purpose and she lives merely because she lives. This is very startling since I sense that she has shut down her feelings before and only lately she feels some anger building up inside her. I wonder whether her relationships with some other younger colleagues and me who lead more fulfilling lives have contributed to trigger the negative feelings in her!

I just hope that none of us would need to go through such feelings because I can tell you that it really is ugly. Shutting down your feelings will certainly bring more harms than good. You’d feel like life is nothing but working, do good deeds and perform your prayers. I am not saying that perform the prayers is not good but life is certainly more than that. Surround yourself with family, good friends, great books and do lots of cool activities. Please don’t die before your time! **These last sentences make me sounds like Dr Phil, don’t I? Hahahahha**

I have finished A Year in the Merde. It really is hilarious especially the bit about the differences on food, sexuality and red tapes in England and France. A must read if you want to know why French can be so arrogant but yet romantic and Brits would always be sarcastic no matter what.

I continued reading ‘tis last night. I think I can really understand why abah wanted me to become a teacher. He always thought highly of this career and that was how Gebob and Kojeh ended up being teachers. For him teaching is not about going into the class, ask the student to open up the book and read. It’s more about nurturing their personalities and abilities. I remember when I was small; a young man came over to see abah during Hari Raya. He merely came over to thank abah for making him realized that he could reach for the star if he was willing to work hard. I guess that would be one of the best days in his life.

The next books in my list: Merde Actually, my sister’s keeper and some other books, which have been read halfway hehehhe.

It really was a very pleasing week I would say. Got to make someone’s day (I assume), received a good news for myself and learned a thing or two and master a few tricks. All in all, a great week!

Here’s a poem for the person who celebrated his birthday with a bang this week.

XV –Twenty love Poems and A Song of Despair

I like for you to be still: it is as though you were absent,
And you hear me from far away and my voice does not touch you.
It seems as though your eyes had flown away
And it seems that a kiss had sealed your mouth.

I like for you to be still, and you seem so far away.
It sounds as though you were lamenting, a butterfly cooing like a dove.
And you hear me from far away, and my voice does not reach you:
Let me come to be still in your silence.
And let me talk to you with your silence
That is bright as a lamp, simple as a ring.
You are like the night, with its stillness and constellations.
Your silence is that of a star, as remote and candid.

I like for you to be still: it is as though you were absent,
Distant and full of sorrow as though you had died.
One word then, one smile, is enough.
And I am happy, happy that it’s not true.

haha. nice review~ especially with the part with "..the rest of them would just closed their eyes with jackets and such". that would be me! yup. setuju dgn review ko.

and hope you're happy~

gimme back the wig! i used it once... at lynna's place!