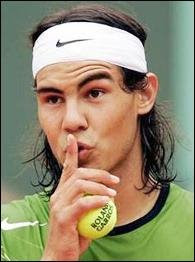 pic courtesy of http://espn-att.starwave.com/media/ten/2005/0529/photo/r_nadal_i.jpg
I was at the clash of the titans yesterday. Pics will be uploaded as soon as me girlfriend found the camera cable and send the pics to me. :)

It’s been a month without any posting so I had to struggle to update my blog today. Hence the title.